Handpumps Joined at the Hip: Two-for-one or Double Trouble?

Water point data is available from the Gambia for the first time ever with the addition of 161 records. This data was collected as part of a handpump evaluation study that was recently carried out by the Institute for Sustainable Futures (University of Technology Sydney) in partnership with Oxfam.

Below is a guest post analysing this unique data from Tim Foster, researcher at the Institute for Sustainable Futures at the University of Technology Sydney and member of the WPDx working group. 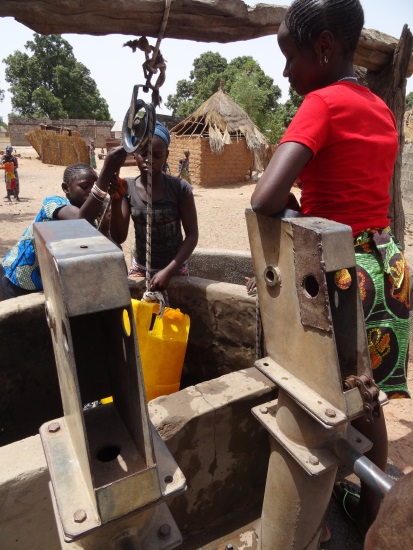 An interesting quirk of the rural water supply landscape in the Gambia is the preponderance of handpump ‘twins’.  Throughout the country it is a common sight to see two handpumps installed on the same wide-diameter well.

The original rationale for this approach is unclear, but it seems to have emerged during a large-scale German-funded programme implemented throughout the 1980s and 90s. Two possible explanations come to mind. First, programme planners wished to build-in redundancy, such that when one handpump breaks down, there is a back-up that can be used until repairs are carried out. Second, two handpumps might help alleviate queuing by essentially doubling the discharge capacity of the waterpoint, without the need to construct a second well.

The prevalence of twin handpumps posed some unexpected data collection and analytical questions.  Should a well fitted with two handpumps be considered as one waterpoint or two?  And if it is considered one waterpoint, what is the overall functionality status if one handpump is producing water, and the other is not?  (For the purposes of the WPDx submission, we opted to define each handpump as a single waterpoint). The situation also presents challenges for statistical analysis. Independence of observations is a bedrock assumption for some analytical techniques – but clearly the fate of two handpumps situated on the same well cannot be said to be independent of each other.

That said, the operational performance of the twin waterpoints provides useful insights into the decisions and priorities of water users when it comes to waterpoint operation and maintenance. When analysing handpump functionality, a Mark II pump was twice as likely to be working when it was a single pump installation than if it was part of a pair. Even when defining twin handpumps as one waterpoint, the functionality rate was higher for single installations (68% vs 54%). Notably, only 15% of twin waterpoints had both Mark II handpumps working.

These findings are perhaps unsurprising. The presence of alternative sources is commonly identified as a reason why waterpoints fall into a state of disrepair. In the case of conjoined handpumps, the alternatives are effectively two feet away from each other. Furthermore, while installing two handpumps on one well might be cheaper than constructing two separate wells, this trades off the ability to distribute waterpoints in a way that minimises water collection times, another factor that plays an important role in whether or not people are willing to pay for the upkeep of their water supply.

While these findings are interesting, this was not the core focus of the work. Definitive conclusions require more thorough investigation, especially as single waterpoints tended to be more recent installations, so this is not a perfect comparison. The sample sizes involved were also relatively modest. Nonetheless, the preliminary data would suggest that installing two handpumps on one well will not necessarily achieve either objective of building-in redundancy or doubling the output in the long term.