Mr. Whitfield shared that a critical part of the new commission’s strategy to undertake these objectives and manage the country’s resources better is to collect and report accurate water point data. Additionally, he emphasized the importance of good-quality water point data to effectively execute Liberia’s monitoring and evaluation systems and promote the sustainable development of the republic. “Monitoring and evaluation, as part of the regulatory function, is very important for the government. If we want to measure what is being done by some of the NGOs and partners, or businesses in the sector, it is through a water monitoring and evaluation system that we can get that done,” shared the chairman.

DataRobot, an automated machine learning platform that helps build and deploy accurate predictive models, has partnered with the Global Water Challenge (GWC) to pilot their Artificial Intelligence (AI) for Good: Powered by DataRobot initiative. DataRobot created AI for Good because they believe artificial intelligence has the potential to help solve the greatest challenges facing society. Whether it’s improving healthcare and education, mitigating the effects of climate change, or fighting cybercrime, DataRobot trusts that AI has the power to make meaningful change.

In 2018, DataRobot and GWC, the Water Point Data Exchange’s (WPDx) parent organization, worked closely to develop sustainable water solutions and advance WPDx’s capacity. More than 500,000 data points were analyzed to create WPDx’s advanced analytics tools. Building onthe successful results achieved with GWC’s pilot collaboration, DataRobot launched AI for Good: Powered by Data Robot. Now, they are looking for other non-profit organizations to partner with them and discover how AI can also help them reinforce their work. DataRobot’s goal is simple: Impact one million lives in the first year. At WPDx, we are thrilled that our partnership not only led to the enhancement of our platform’s power but that its effective results have inspired a company like DataRobot to use data to create sustainable and lasting impacts.

To learn more about GWC and DataRobot’s collaboration, please watch this video.

Sierra Leone, like many countries, has received significant international support to collect data about rural water services. As is typically the case, valuable information about rural water services has been collected both through large-scale national inventories and small-scale monitoring efforts by NGOs of their own work. Despite massive investments in data collection, this data remained largely unused – aside from some simple summary statistics. When local governments needed to make important decisions – where to build water points and which services to rehabilitate – these decisions were, “done by assumption and political decisions.” Despite the wealth of data available, critical decisions were still being made by a best guess.

There were two fundamental reasons that the data was not routine used. First, the data available was incomplete. It had not been regularly updated, and the wealth of data collected by each NGO remained fragmented. The bigger challenge, however, was that data analysis is hard. Most district water officials, whether in Sierra Leone or anywhere else, do not have the ability to analyze large datasets to generate insights on specific actions to take. While summary statistics can help measure services, they often fall short when trying to make tactical decisions.

WPDx worked with the Ministry of Water Resources to solve both of these issues. The Ministry of Water Resources launched the National Digital Monitoring Approach, which included a requirement that all data be shared to the Water Point Data Exchange’s global data repository. This harmonized fragmented data and allowed many different sources to stitch together the most complete picture of water services in Sierra Leone’s history. Building on this, the Ministry engaged a local university to host a training for all district officials on how to use the WPDx decision support tools. Finally, they worked with the Ministry of Finance to pass the first national directive requiring the use of WPDx decision support tools in all investment decisions for rural water services.

Today, district officials across the country are using WPDx tools to harness evidence and improve the way water decisions are made for millions of people in Sierra Leone. Desktop models suggest that using data in this way can improve efficiency by as much as 25%, allowing governments to reach ¼ more people than they otherwise would with the same budgets. This increased efficiency is enables Sierra Leone to accelerate progress towards achieving the SDGs and leading the African continent in the use of data.

You can hear how WPDx has transformed the water sector in Sierra Leone directly from the M&E Manager for the Ministry of Water Resources in a short video, available here.

In their first Global Report on Water, Sanitation, and Hygiene (WASH), the Open Government Partnership (OGP) selected the Water Point Data Exchange (WPDx) as the leader in setting a standard for mapping and collecting rural water data. WPDx’s standard was classified under “Basic level and quality of service data.” The OGP established that the nominees in this category must provide a clear and globally endorsed data standard, technical guidance, and a global data repository that enables all stakeholders to access and analyze data about water services easily. “For OGP countries looking to address WASH through their action plans, standards around water reporting build on the experience of other systems and allow for learning and comparison. Using existing standard reporting processes reduces conceptual work and makes systems compatible and comparable across service providers and countries,” the report added. WPDx is honored that OGP recommended our standard for collecting rural water data. We continue committed to improving water access for millions of people as a result of better standarized open-source data.

The Water Point Data Exchange was featured in a recent Gartner research paper. “Four Real-World Case Studies: Implement Augmented DSML to Enable Expert and Citizen Data Scientists,” authored by Carlie Idoine and Jim Hare of Gartner, explored how augmented data science and machine learning (DSML) not only gives citizen data scientists access to DSML capabilities, but it also makes experts more efficient and productive. Idoine and Hare selected four cases that they concluded data and analytics leaders should study to understand the business impact of augmented DSML. WPDx was honored to be one of the exemplary cases chosen. Specifically, the authors utilized WPDx as the example to “incorporate governance to manage and guide your augmented data science approach, with significant focus on data access and data quality.” According to the report, “the data provided [by WPDx] guides the Ministries’ planning and providing facts, not just assumptions. And it ultimately provides more trust in the approach and in the results. As Mohamed Small Jueah Bah, Program Officer for Monitoring and Evaluation, Sierra Leone Ministry of Water Resources explained, an augmented approach has made his job “easier, easier, easier, easier, easier. It’s as simple as eating a banana!”

You can read the full report here.

Today is a momentous event for WASH monitoring in Sierra Leone. I want to start by thanking all the development partners who have supported us from 2016, led by UNICEF, AfDB, IRC, Akvo, Global Water Challenge & WPDx and recently Njala University. I extend our thanks to the UK and Dutch governments who provided most of the funds to support the WASH data journey. I also want to thank the UNICEF Country Representative, Dr. Hamid who has made time to be here in person during this launch.

Data is at the heart of any meaningful development in any country. In WASH, data is especially critical because the changes impact on other development indices directly. The government through the Ministry of Water Resources together with the Ministry of Health & Sanitation has been strengthening WASH M&E in the last 5 years. Currently, we pride ourselves to have one of the most comprehensive WASH data in the region. Most importantly we now have the capacity to collect, transmit, store, integrate and analyze all our WASH data digitally. This is no mean feat and we appreciate all the efforts that have gone into making this a reality and a first for Sierra Leone.

We have continued our journey on the improvement of the of WASH monitoring by partnering with the Global Water Challenge (GWC) to help us undertake advanced analytics from the WASH data in our database to produce useful insights that inform decision making for WASH planning. It is very exciting that now with correct data we can accurately determine where we will get the best value for money by building the next water point. It will also give us information on the performance of WASH technologies and helps to decide on the best fit for our country. In the past one week, GWC has been training government and other WASH sector staff on how to undertake these advanced analytics. I am proud that 50 WASH staff graduated and that will spearhead taking WASH in Sierra Leone to the next level.

This is a major milestone for Sierra Leone. As we work together on routine monitoring, routine data sharing, and routine data use, we will become one of the first countries in the world to regularly collect, share, and use data. This is a leadership opportunity for our country and one that will allow us to accelerate progress towards attainment of SDG 6. 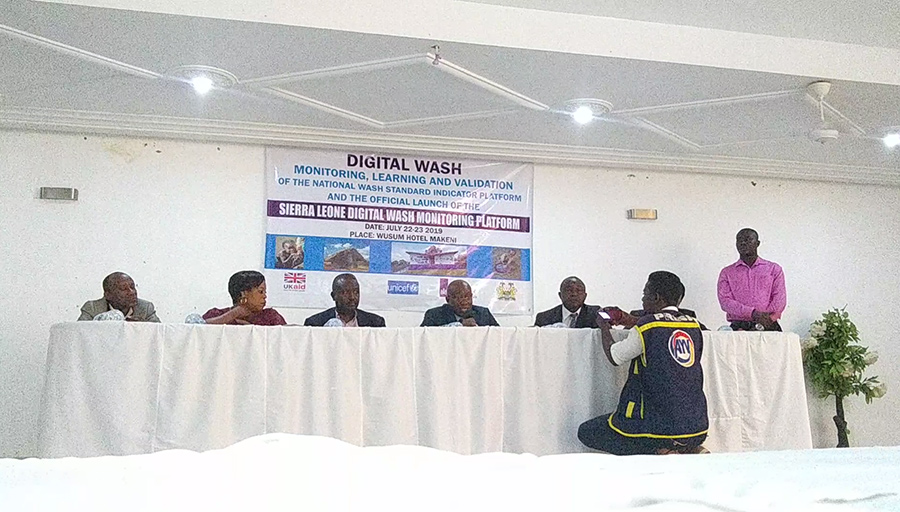 This past June, the US Embassy in Uganda sponsored the largest WPDx training to date in partnership with Uganda’s Ministry of Water and Environment. In Uganda, nearly 2/3 of people living in rural areas lack access to even basic water services.

The data available through the Water Point Data Exchange provides a powerful foundation for advanced analytics. By harmonizing the data in WPDx and employing geospatial information systems and machine learning, WPDx has created four powerful tools to help governments and their partners make data-based decisions on a regular basis.

The data available through the Water Point Data Exchange provides a powerful foundation for advanced analytics. By harmonizing the data in WPDx and employing geospatial information systems and machine learning, WPDx has created four powerful tools to help governments and their partners make data-based decisions on a regular basis.

2018 was a massive year for WPDx, and I’m excited to share a few updates about how WPDx is driving improved across the water sector. We’ve organized these updates by the four main categories in the WPDx theory of change.